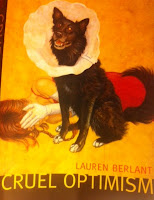 In Cruel Optimism Lauren Berlant reveals that despite deteriorating social, economic, and environmental conditions, people still remain attached to fantasies of the "good life"; her research examines how such fantasies have survived even when conditions for survival are increasingly compromised under postwar neoliberal restructuring. She posits “cruel optimism” as a relational dynamic whereby individuals remain attached to “compromised conditions of possibility” or “clusters of promises” embedded in desired object-ideas even when they inhibit the conditions for flourishing and fulfilling such promises (24, 23). For Berlant, optimism is a formal or structural feeling, such that an “optimistic attachment is invested in one’s own or the world’s continuity, but might feel any number of ways,” including not optimistic at all (13). In other words, maintaining attachments that sustain the good life fantasy, no matter how injurious or cruel these attachments may be, allows people to make it through day-to-day life when the day-to-day has become unlivable. Berlant is essentially concerned with conditions of living or the state of the “present,” which she describes as structured through “crisis ordinariness,” and turns to affect and aesthetics as a way of apprehending these crises; by tracking the various impasses we face today, she suggests that it becomes possible to recognize that certain “genres” are no longer sustainable in the present and that new emergent aesthetic forms are taking hold, alternative genres that allow us to recognize modes of living not rooted in normative good life fantasies.

Text at a glimpse:

Berlant writes, "[e]ach chapter tells a story about the dissolution of optimistic objects/scenarios that had once held the space open for the good-life fantasy, and tracks dramas of adjustment to the transformation of what had seemed foundational into those binding kinds of optimistic relations we call 'cruel'" (3).